pinned to the top. Latest news below this statement.

I’m building this page as I can find the time so please check back when you can for more information.  Thank you.

If you have taken any covid shots I’m sorry to say that I cannot schedule you for an appointment. These shots turn your body into a spike protein factory. You expel these mutant proteins through your skin, breath, and every orifice, contaminating everyone who touches you or shares your breathing space. This contamination is toxic and is infecting and sickening people who have NOT had any shots, JUST THROUGH SECOND AND THIRD HAND CONTACT WITH INJECTED. I can not risk exposing myself and my patients to this hazard.  THE MEDIA IS LYING TO YOU, BLACKLISITING HONEST DOCTORS LIKE THE ONES ON THIS PAGE, AND BURYING THE CLINICAL MEDICAL REPORTS OF THIS DISASTER.

Experienced, established medical experts around the world are all reporting the same thing – that ALL the Covid shots are deadly to the person taking the injection, AND TO EVERYONE WHO TOUCHES THEM OR BREATHES THE AIR AROUND THEM. The following are video reports by PRACTICING and retired clinical doctors and scientists who are seeing the same thing in their patients that I am seeing. People who have had the shots – and these are NOT vaccinations, they are Trojan horse genocide poisons – are making people who have NOT had the shots, sick.  The media is responding to these messages of truth with a rabid, psychopathic campaign of censorship, slander and lies to destroy their reputations, businesses, and lives. We are under attack by the psychopathocracy and HARMAceutical/medical mafia. They are lying to you. This is a disaster of Biblical proportions.

Biostaistician Christine Massey has made 22 Freedom of Information (FOIA) requests from Canadian universities and institutions for proof of THE EXISTENCE OF a SARS COVID virus. Every single one has had to admit that they don’t have it. Are people getting sick? Yes. The cause is something else they don’t want anyone to know about, and based on the stunning, thoroughly researched book The Invisible Rainbow by Arthur Firstenburg ( available at my office) it’s probably EMF poisoning potentiating the bioweapon technology in the shots, which can spread to pure bloods (people who have not had the death shots). Wear EMF shielding and quit eating their rat poison  diet.

I just don’t know what else to say here. If you still think this is all dandy and you are a shot pusher, you are guilty of supporting this unimaginable level of evil and you will get what you deserve. When all this comes to a head and we have Nuremburg Trials V2, there won’t be an unoccupied lamp post anywhere to be found.

“Since January 1, in the laboratory, I’m seeing a 20 times increase of endometrial cancers over what I see on an annual basis,” reported Dr. Cole.

This article by Dr. Mercola gives a good summary of the various ways the Covid liars are manufacturing a crisis where none existed (before they started poisoning peasants with their death shots).  For example:

According to the U.S. Centers for Disease Control and Prevention, you’re not counted as fully vaccinated until a full 14 days have passed since your second injection in the case of Pfizer or Moderna, or 14 days after your first dose of Janssen, despite the fact that over 80% of deaths after the vaccines occur in this window.

German researchers have discovered that water extract of dandelion leaf prevents the spike proteins in the covid shots from attaching to your ACE2 receptors. This is a fancy way of saying just drink dandelion tea. It is amazing stuff, not just for this, but for your liver and blood too. Click the beginning of this paragraph to link to the article.

The engineered spike proteins from SARS-CoV-2 can be STOPPED by a common “weed” that is exterminated from lawns every year. A German university study found that the common dandelion (Taraxacum officinale) can block spike proteins from binding to the ACE2 cell surface receptors in human lung and kidney cells. The water-based dandelion extract, taken from the plant’s dried leaves, was effective against spike protein D614 and a host of mutant strains, including D614G, N501Y, K417N and E484K.

I really love a product called Dandy Blend. It’s an instant dandelion beverage powder that you can use hot or cold. It has a roasted coffee flavor and if you are a coffee addict, this would probably be the best thing to switch to.  You can just do a search for Dandy Blend to find it for sale from numerous vendors.

Many of us in CLINICAL PRACTICE – not research or theoretical medicine – are seeing the actual results of these experimental gene therapy shots. Massage therapists, doctors, holisitic therapists, you name it, we are all seeing people being maimed and killed by this global malpractice campaign. Daily I hear stories from patients about loved ones dying or becoming ill with the typical cardiovascular/blood clotting events that people who take the shots are having.

Here is one woman’s report.  This is typical of what many women are seeing:

“Can I  just tell you in the past week, 3 of us at work have had the most insane amount of bleeding during our cycles. I’m 42 and it literally scared the hell out of me by how excessive I menstruated and almost had to leave work.”

Women making these reports are also frequently having fist-sized clots, miscarriages, and bruising, among a long list of other symptoms.

“My 14 year old daughter has had 3 periods in less than a month. She goes to public school. I’m pissed.”

“I went to a spa to get a wax the other day. they asked if I’d had the shot whithin 30 days . . .  I said No, expecting to be told to leave, instead they said, Great! We are no longer waxing vax’d clients as their skin is coming off.”

“Didn’t even think bruising would be a part of this but makes sense. Since I miscarried 3 weeks ago after visiting vaxxed family I’ve had bruises all over my body.” 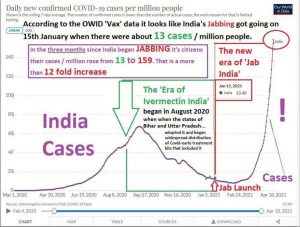 Hey Ruud – here’s a unique situation for you – how about we drag your wife and kids to Walgreen’s and shoot them up with your poison? I mean the REAL stuff – not that fake saline crap you all stage for your TV celebrity photo ops.

Here is a link to a collection of stories of how people die from these shots. Read this before you volunteer. (Note 5/19/21 – Google has removed this link so look at this instead🙂 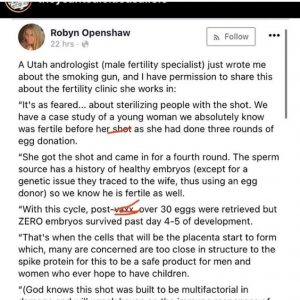 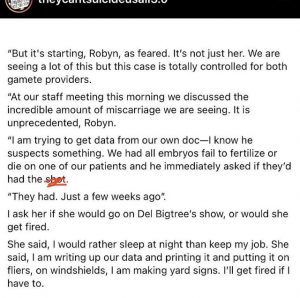